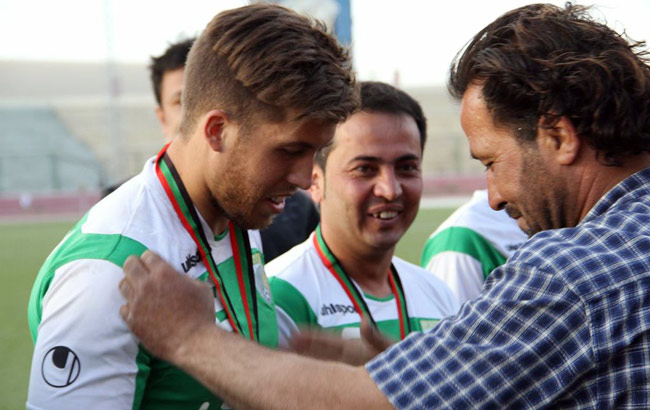 ESPN went to Kabul, Afghanistan, for the story of Nick Pugliese, an American who found an opportunity to continue his soccer career after college in an unlikely place: Afghanistan’s pro soccer league.

Tom Rinaldi[espnmediazone.com] voices the story, which explores Pugliese’s life in Kabul last fall. A native of Rochester, N.Y., Pugliese went to Afghanistan to take a job after graduating from Williams College in Massachusetts, where he was a soccer standout. He played high school soccer at Rochester’s McQuaid Jesuit.

“I was just fascinated by the idea of an American all by himself living in this country and of all the things, he was playing professional soccer,” said Dan Arruda, producer of the feature for ESPN, who spent 10 days in Afghanistan with Pugliese. “It just seemed very surprising to me and I wondered what his life was like.”

The SC Featured story will debut during ESPN’s flagship news and information program SportsCenter on Sunday, Feb. 9, at 10 a.m. ET on ESPN, and will re-air on other editions of the program throughout the day.

Some quotes from the feature:

“You cannot explain this place in two minutes, I think you couldn¹t do it in two hours. I¹m not sure whether I will be able to share this experience with people or if it¹s something that I¹ll just hold with myself for the rest of my life.”

“So many people could have stood in my way and said ‘I don¹t think it¹s a good idea that you¹re here,’ or ‘this is an Afghan team,’ and no one said a thing.  It was just, ‘yeah, come on and play.’ That simple.”

Nick was also featured on SI.com (Sports Illustrated) in June 2013, shortly after winning the Kabul Cup, which is Afghanistan's version of the FA Cup.  Click HERE to read the SI.com article from June 2013.